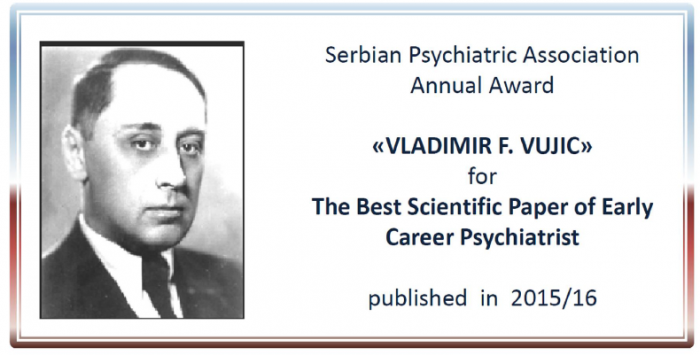 The Executive Board of the Serbian Psychiatric Association, during the General
Assembly held in December 2014, established the Annual Award for the Best Scientific Paper of
Early Career Psychiatrist published in the previous year, in attempt to stimulate high quality
research in Serbian psychiatry and to highlight the values promoted by professor Vladimir F.
Vujic (1894 – 1953), the pioneer of Serbian academic neuropsychiatry and corresponding
member of the Serbian Academy of Sciences and Arts.

As a young scientist, Vladimir Vujic started his research carrier in Prague, when he
published the article entitled: “Synesthesia of hallucinated voice and perception of colours”,
describing an unknown phenomenon for psychiatrists of that time. He continued education in
Vienna, where he worked in the research group of Nobel Prize winner Julius Wagner-Jauregg.
Professor Vujic was devoted to thorough understanding and utilization of good scientific practice
principles, alongside with interest in the psychoanalysis as a method of treatment. On the basis of
his efforts and contributions, the courses of psychology and psychopathology were introduced in
the neuropsychiatry curriculum at Belgrade University School of Medicine. However, this was
only a minor part of an extraordinary contribution of this exceptional man, doctor and scientist to
the history of psychiatry and medicine in Serbia. Professor Vujic visited many university centres
in Europe, gaining knowledge and experience, but continually bearing and cherishing an
outstanding patriotism and national pride, and contributing to the improvement of quality of
neuropsychiatry in the country of his origin.

Wishing to continue the mission of Professor Vladimir Vujic and his successors to
promote Serbian psychiatry, the Serbian Psychiatric Association announces the Annual Prize
“Vladimir F. Vujic” for the Best Scientific and Research Paper published in the previous year.
The decision will be announced on the World Mental Health Day. The Award of 1000 euro in
RSD equivalent will be given for educational purposes, such as congresses, courses and other
educational activities in the country and abroad, and will be available in a year that follows the
announcement.

Candidates must fulfill the following criteria:

1. Psychiatrists, psychiatry trainees or PhD students in related fields, not older than 40 years
(on 31 August 2016 and the last day in August every following year), residents of Serbia.
2. Must be the first author of scientific paper that has been published between 1 September
2015 to 21 August 2016.
The application:
1. Personal data – name, date and place of birth, telephone number, e- mail address, working
place/certification of PhD status if the candidate is unemployed.
2. ID card copy.
3. Short biography (200 words), with bibliography.
4. Competing publication, published in Current Contents (pagination or DOI number
required).
5. For unpublished articles attach the decisions of acceptance by the Editorial Board.
Deadline for application is 1 September 2016.

The applications should be sent by the post to:

Decision of the Award Winner will be announced on the 10 October 2016, on the World
Mental Health Day and the Award Ceremony will be held at XV Congress of the Serbian
Psychiatric Association, 12-15 October 2016, Belgrade.